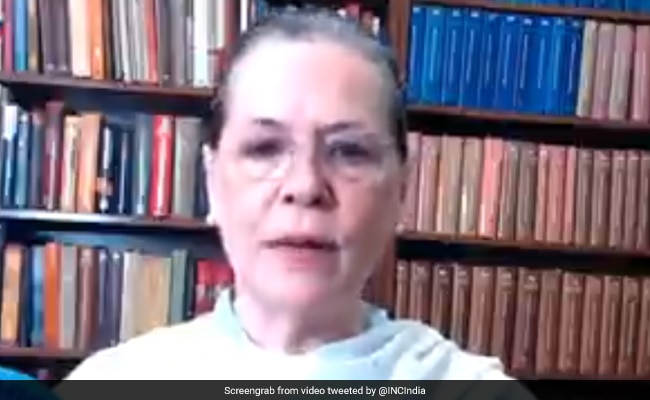 Sonia Gandhi has already included her loyalists in the parliamentary party.

Congress president Sonia Gandhi will be chairing a virtual meet of the parliamentary strategy group tomorrow — a first since the Working Committee meet held on August 24 — where she will be interacting with key writers of the explosive letter that threw the party in turmoil last month.

Senior Congress leaders Ghulam Nabi Azad and Anand Sharma, who are part of the strategy group, were among the 23 leaders who signed the letter that called for major changes in leadership, the party organisation and internal elections.

Sonia Gandhi has already included her loyalists in the parliamentary party to effectively neutralise the dissenters.

For the parliament session beginning September 14, the Congress is expected to firm up its opinion on a number of ordinances issued after Prime Minister Narendra Modi announced the world’s biggest lockdown in March.

The ordinances the Congress will oppose include the one on PM Cares fund, but the party will support the overall taxation ordinance, sources said. Pay cuts for MPs will be supported, but the executive decision of stopping the MPLAD funds for two years will be opposed since it stops the ongoing works.

Sources said the party will also oppose the “One nation one market for farmers” as it feels that the farmers will be short-changed when they sell their produce. The closure of mandis will leave many jobless, especially the poor who work as porters, weigh men and others. Such a law will also infringe on the states’ rights, the party contends.

Despite her magnanimous comment at the Working Committee meet that she bears “no ill will” towards the dissenters, Sonia Gandhi has kept them at arms’ length. All of them have been left out of the key promotions in the parliamentary party and even in the task force for the Uttar Pradesh assembly elections due in 2022.

So far, Mrs Gandhi has not made any change in the All-India Congress Committee or set the stage for an AICC session, which were promised to dissenters at the Working Committee meeting held last month.

Will India side with the West against China? A test is at hand